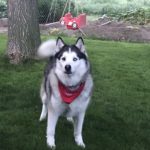 Ace was pictured on the husky/wolf website in May 2012. I called quickly to let them know I wanted him. Someone else had taken him home. Watching the site the next day Ace was shown again. I called and was so happy to learn he was going to be mine. We were meant to be together! After traveling to Utah from Co I brought Ace home. We enjoyed our hiking, camping and daily walks. When Ace was almost 6 we discovered he was going blind. After 4 months we decided to have cataract surgery to restore his sight he was so grateful. Acted like a bouncy puppy. On 9/5 Ace became very ill. They diagnosed him with pancreatitis. We brought him home and we had to let him go on 9/11/19. My best friend took most of my heart with him. Memories I will cherish for life. Run fast my forever friend. We’ll run together again someday.