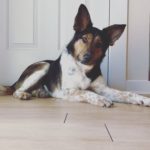 We adopted our Bronco baby from a shelter in Missouri 2 years ago. He was 12 weeks old and just the most precious puppy I’ve ever met. He was a wild man as he grew up. We called him “The Buckin’ Bronco” because he was always so happy he couldn’t contain his excitement. He would romp around the house just as happy as could be every single day. He was very vocal too as a pup. He loved to talk! Bronco loved to go on adventures. He loved being outside except for when it was raining of course. But not even a rainy day could bring Bronco down. He was the happiest dog ever. It was a couple months after we moved back to Colorado when we noticed Bronco was acting different. We later found out he had a neurological disorder. He had gone completely blind and started losing all motor skills. Letting Bronco go was the hardest decision Aaron and I have ever had to make. Just doesn’t seem fair that we only had you for 2 years. We miss you everyday, Bronco. Rest in Paradise baby boy. We love you.