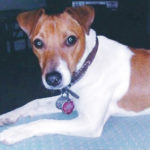 Charlie was a classic Jack Russell Terrier—high-spirited, intelligent, indulged (spoiled), independent and cherished in his new home (sharing Western artist Charlie Russell’s moniker). Although Dad valiantly tried to be Charlie’s alpha master, Charlie treated him like a beta brother. Charlie was a “magical, mystical” creature, invariably becoming involved in making connections, bringing strangers together and having a positive effect on the universe, Dad said. Both made friends at Fossil Creek Dog Park, and spent many days bouncing along around town in the old station wagon. Adopted as Dad’s dog, Charlie preferred the warm lap of Mom, who became the alpha early on. Charlie was her companion and house mate for years after Dad passed on. Gradually Charlie aged, suffered from physical ailments and barked increasingly (becoming Charles Barkley) around people. Although the family misses his little body (but outsize presence), we all hope he found his beta pal where all dogs go.