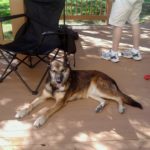 I adopted Echo in January 2008, from the Cripple Creek Animal Shelter. On adoption day, I signed the contract and Echo immediately followed suit by placing a muddy paw print right there with my signature! She had never lived inside; never had toys, or been on a walk, or had a bath. She settled in with me as if we had always been together. She adored her walks, and road trips in my truck. Whenever I sat and loved on her she would moan slightly in contentment. She literally barked just twice in the two years and eight months that I was blessed with her companionship. Echo was truly gorgeous, and people would often comment that she looked like a fox from afar. On August 20, 2010 I was forced to say goodbye to my Echo Star. She had lung cancer that advanced rapidly following diagnosis. I’m just now posting this tribute, because back then I wasn’t even aware that I could do so. She surely deserved one…my beloved brown-eyed girl. I miss her still. Angie Lawrence