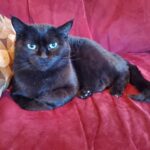 Gracie went to sleep on June 19th helped by Dr Dove. She had a tough start to life and was smaller than many cats, despite this she gave us so much love, and would often engage in conversations over “Cat Biscuits”, despite being very wary of strangers she picked her favorites and every one of them remembers the love she gave them, she would greet them and literally throw herself on the ground practically winding herself in the process. We will miss her and her little ways – Goodnight Gracie and sleep well.