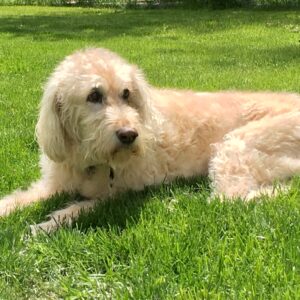 Harley Thomason, Goldendoodle Extraordinare, crossed over the Rainbow Bridge on August 13, 2017. His transition was eased because of the compassionate approach of Dr. Freed. Harley was such a gentle companion. He loved his ol factory tours whether around the block or in another state. His Dad nicknamed him Buddy. When I first met him, I looked at my fiancè and back at Harley and back at my fiancè and said right out loud: “Gosh, I really don’t know which one is cuter!” Harley was so gentle that he stood in line behind four cats to get to his own water dish. Both of us adored his spirit, his enthusiasm, and his playfulness. I have had only 3 dogs in my lifetime. Greg has had many. Harley has claims to a chamber in my heart that no human ever occupied. He is still missed.