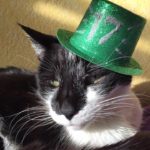 Junior, aka “the masked snuggle bandito” was a notorious lap hog and seasoned sunflower. If the sun was shining, you would find Junior lounging wherever the light touched. Junior spent most of his life trying to fit in every box he saw, or yowling when he ‘killed’ toys. He loved tuna, turkey, and at times made valiant efforts to steal unsupervised breakfast burritos. Junior always insisted on a consistent bedtime, and would often sit on the bed watching his humans get ready so that he could climb onto their chests the minute they laid down. In his youth, Junior developed a dangerous love for lilies-the consumption of which brought on the kidney disease he lived with for nearly 10 years. This experience did not dissuade him from attempting to eat any plant that was ever in reach. Junior excelled in reading human emotions, and could always be counted on for nose-to-nose cuddle time when the slightest palpable anxiety was in the air. 2000-2017.