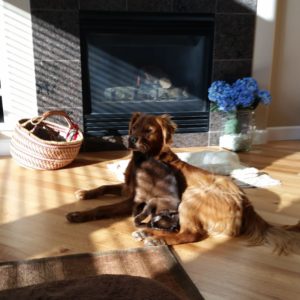 In loving memory of Koa

Koa was born on the day we let our beloved golden retriever Alex go, January 27, 2010.  The name Koa is Hawaiian and means “brave, bold, fearless”.  Koa was all of that and more throughout his relatively short life.  Koa was a constant companion to my wife and me, whether on a morning walk with my wife or a ride in the truck with me or just watching TV in the family room. Koa also had a best cat friend Phin.  Phin is a male Burmese and he loved Koa. Phin was Koa’s companion when we were at work.  If Koa was sleeping in the laundry room while we were at work when we got home, Phin would be there in the room with Koa.  Phin also loved to rub on Koa’s muzzle and plop down in front of him and paw and play with his snout till Koa would get up and move.  Then Phin would follow and be right back rubbing his muzzle again.  One of Koa’s favorite things to do was to exchange one of his toys for a shoe, a sock, one of my wife’s slippers, a cat toy or whatever was handy at the time. He would place his toy where the exchange took place and would come running down the stairs or out of the office and arrive on his bed in the family room proudly displaying his new found item.  He would then parade around the room till you took notice of his new found prize and then play keep away with you if you tried to grab the item.  Koa loved the outdoors whether in the summer rolling in the grass or in the winter rolling in the snow.  During the mowing season Koa would patiently wait on the deck in his favorite lounger while I mowed the lawn.  During the winter he would play in the snow pile that I created while shoveling off the deck.  The pile could be quite large depending on how much snow we got and after shoveling was done he would stand on top of the pile and survey his yard.  Koa was a great greeter when company would arrive, he loved to be noticed and wanted you to pet him.  Even when fighting the cancer, he would never miss the chance to greet somebody either in our house or while at the mail box outside.

Koa’s last day with us was November 10, 2019.  He will join our 4 other golden retrievers where the good lord watchers over all the beloved pets.  Koa’s passing has left a massive hole in our hearts. Our hearts will heal and our lives will move on over time but his memory will live on with us forever.

We love you Koa, Rest in Peace.