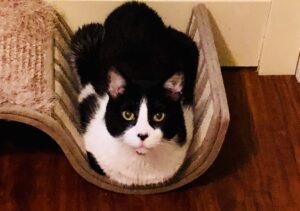 Milo (Milagro) was a tiny tuxedo kitty who survived being hit by a car as a kitten. Milo crossed the Rainbow Bridge with the help of Kathleen Cooney, DVM, on September 14, 2018. Milo’s adoptive mother witnessed this accident, scooped him up, and was at a veterinary office within minutes. Milo was not given great odds. He was named Milagro/miracle. Not only did he survive, he believed from that moment on he was Mufasa. He would take on a cat 2.5 times his size. He came into a multi cat household and tried to prove his dominance. He was animated and he had great heart. He would sit on top of your head or drape himself around your neck. Our lives were made fuller by his constant antics!