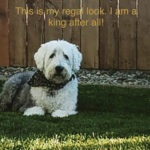 Minos was so special & so loved. He was almost 13 1/2 years old & we said goodbye to him on November 8, 2018. To say he was a gentle giant is putting it mildly. He knew his strength & as his breed, Old English Sheepdog, is known for he kept us all safely herded in his care. His little buddy, Plato learned by his example & is now lost without him. We first saw Minos over the fence in our neighbor’s back yard. The little black & white puff ball was bounding around so joyously. We had an older sheepdog at the time, Winston, & thought a new puppy would be a good idea for all of us. Winston loved him so much & as they do, taught Minos the rules of the road. (https://hometoheaven.net/honored_stories/winnie-2/) After we lost Winston Minos was so sad & lonely- Less than a year later we found him his little brother, Plato. Minos, the King, loved Plato so unconditionally. Our hearts are broken, but we know he is in a better place.Thank you Amber for your care during this difficult time.