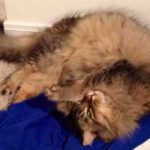 Poto came into his mama’s life at a mere 6 weeks of age, when someone dropped him off in a box in front of a pet store. He was a spunky little guy with lots of personality and quickly won over the hearts of everyone he met. He had the sweetest kitten face, and the loudest mouth you ever heard! He loved to cuddle, play fetch, bring his mama “presents” from the outdoors, and sit on her head while she tried to sleep. At almost 20 years of age, he had succumbed to numerous health issues, and it was clear to his mama that his fight was over. On December 1, 2019, she made the heartbreaking decision to let her little guy rest forever.