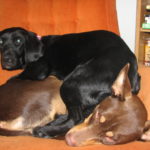 Selkies and Sunday, our other puppy, became inseparable. They would zoom together chasing squirrels. They would run together carrying the same stick or rope. When Selkies wanted to play, she would bounce in front of Sunday. The chase would be on. She loved being out in nature, rolling in the grass, resting in the sun beside Sunday. When Kevin called her, she would kick her legs out behind and sprint to him. He was her person. As puppies they would lie face to face moaning in their secret language who would get the toy. Selkies patiently allowed Sunday to chew on her Mickey Mouse ears. She would lie on top of Sunday whenever possible. Selkies favorite thing was to be with her family. Selkies was kind, gentle, brave, protective of her family. Her hind end would wag with her relentless tail. We will forever miss her subtle yet powerful kisses, her joyful greeting, car rides, the way her ears would perk up, her deep brown eyes. Everything! She will always be our Sweet Baby Girl.