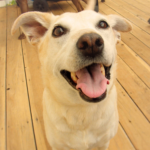 Our Shelbie has lost her battle with lymphoma after almost a year of fighting. A sweet but ferocious little dog, she spent her days protecting her family from every Girl Scout, Pizza Delivery person, and mom with a stroller who dared pass by our home. Coming into our lives in 2010, Shelbie had a knack for knowing when she was needed, never leaving their side. When her fur-sister Martina joined the family in 2015, Shelbie pretended to be annoyed, but secretly loved protecting her “little” sister; and Martina loved hiding behind Shelbie and letting her be the brave one. Every person that met Shelbie has remarked on how “sweet” she was. Shelbie leaves behind one heartbroken sister, as well as three boys and parents who will miss her terribly. In remembrance of Shelbie and every dog that has moved on to the Rainbow Bridge, we ask that you adopt a shelter or rescue dog. We love you, sweet girl.