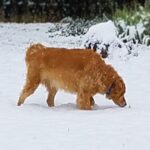 Tanner was our family’s first dog. He was born in Florida. He was our constant companion for over 12 years. He visited most of the 50 states and was a world traveler. He spent some time in Okinawa. He was not a fan of flying, but came with us anyway to try the food. He loved to chase lasers and would play Tanner Ball, his version of fetch. He was also a master escape artist and could extricate himself from any harness. He hated people in capes and inflatable lawn ornaments. In his older years, he slowed down a bit and enjoyed a good nap. Having spent most of his time in hot climates, snow was new to him. He would bark at the snow since it covered his grass. Eventually, he came to love the snow. He was diagnosed with kidney failure in December 2020, and we lost him a month later. He was a good friend and part of the family. He will be sorely missed but never forgotten.