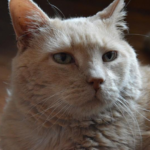 What Taynan Taught It was routine for Taynan to lie in his bed and purr. He even purred in the vet’s office and the day he was euthanized due to cancer. But Taynan had not had an easy life. When I met him, he was living inside big, open water pipes. I put food where I saw him, but I also saw teenagers take his food. For the rest of his life, he slunk quickly away from people he saw outdoors. He completely accepted strangers in the house, though. He realized I only let safe people in.

He never fought another cat, and never caught a bird or mouse. He didn’t claw furniture or spray, and never roamed in the nine or ten years we shared. He’d follow me around the yard or sunbathe on the neighbor’s wooden deck and always came when called. Taynan Daniel was named after two fictional heroes who lived their loving ideals no matter how frightening their experience. Taynan’s courage wasn’t fictional, though. He experienced not having a home or food, and finally dying from cancer.