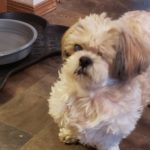 This tiny Shih Tzu crossed my path when I was 16. He was my rescue. 2 years old without a name. I called him Zuki. Like Suzuki. In his life he was dog fighting bait, he lost an eye, he survived a rare canine virus but he was always a trooper. He hated the broom, he played with much bigger dogs, and his favorite thing in the world was to be held. Zuki decided to adopt my grandfather. He was my grandpa’s shadow. Such a little dog had such an impact on the lives of me and my family. He was definitely one of a kind and he will be greatly missed. Rest In Peace my little dude. I love you